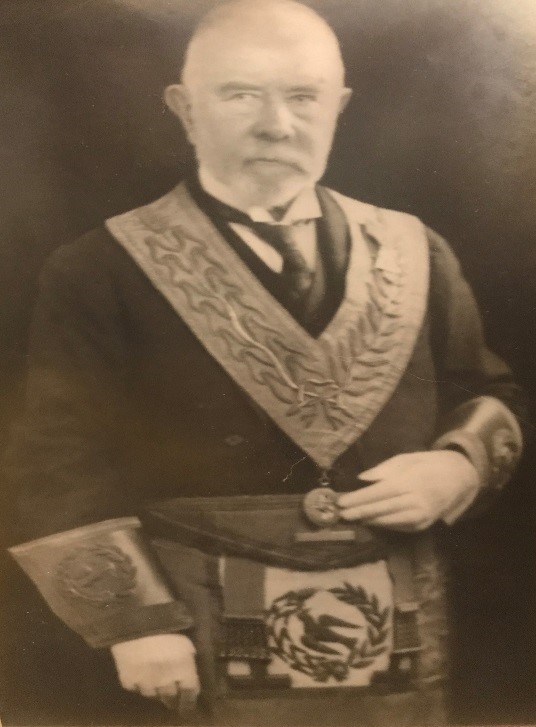 Daintree Lodge was established by Captain John Dodson Daintree while serving on HMS Glory as part of the Royal Navy’s China Fleet in January 1903, on a piece of British leased territory known as Wei Hai Wei (Way Hi Way) in Shantung Provence, situated in Northern China.

At the outbreak of WW2 hostility between Japan and China escalated and the China Fleet was reduced. In 1938 the Japanese occupied the Naval facilities at Wei Hai Wei, Daintree Lodge re located to Hong Kong.
The warrant of the lodge, (in Masonic terms, it’s Birth Certificate and licence to operate), was transferred by several serving Masons to Hong Kong via Singapore. Shortly after, the colony was overrun by the Japanese in 1942, the Masonic buildings ransacked and members either taken prisoner or put in internment camps.
The warrant was hidden from the Japanese in the Bank of Indo China by an Iranian mason and labelled “Iranian Government Documents.” They were then sent by Japanese freighter to the French Bank of Indo-China in Shanghai for safe keeping and finally returned to their owners in 1945 after the Japanese surrender. All surviving members of Daintree Lodge were now back in the United Kingdom and again by pure chance a young Mason in Hong Kong heard of the impending closure of Daintree and had the Warrant returned to his father WBro JH Bolton, a past master of Daintree now living in Fareham, Hampshire. He in turn contacted two more members living locally, and after some organising, on Tuesday 10th June 1947 the first meeting of the post war Daintree Lodge took place in Portsmouth.
Daintree Lodge now meet at Botley Masonic Center every second Tuesday in March to July and October to December and still celebrate our links with the Far East by hosting a Chinese themed evening in March to coincide with the Chinese New Year.
These days the Lodge is made up of members from all walks of life but still has many ex serving members of the Royal Navy among its numbers and maintains close ties with the local Chinese community.
We enjoy raising money for both Masonic and Locan charities with Hampshire Search and Rescue our primary local benefactor.
Lodge Meetings: Second Tuesday in March to July and October to December
General Purpouse Committee Meetings: Third Tuesday March to July and October and November
Lodge of Instruction: For masons of any lodge, wishing to progress. Fourth Thursday February to July and September to November.
If you are already a Mason and would like to come along to a meeting or attend the Lodge of Instruction, please click on the Contact Us button above and find the Secretary.
If you would like to become a member, click on the Contact Us button above and find the Membership Officer.